The head of the country’s largest flight attendants union said people who took part in the riot at the Capitol must be banned from flying – after a passenger projected a “Trump 2020” image on a flight to Washington, DC, a day before the siege.

Sara Nelson, president of the Association of Flight Attendants, said in a statement that “some of the people who traveled in our planes (Tuesday) participated in the insurrection at the Capitol today.”

She said in a statement Wednesday that “their violent and seditious actions at the Capitol today create further concern about their departure from the DC area.

“Acts against our democracy, our government and the freedom we claim as Americans must disqualify these individuals from the freedom of flight,” said Nelson, who along with the union endorsed President-elect Joe Biden before the Nov. 3 election.

“The mob mentality behavior that took place on several flights to the DC area yesterday was unacceptable and threatened the safety and security of every single person onboard,” added Nelson, whose union represents some 50,000 attendants at United, Alaska and more than a dozen other airlines, CNBC reported.

On an American Airlines flight from Dallas to Washington, DC, a large contingent of Trump supporters got in an angry yelling match with other passengers after one projected “Trump 2020” on the cabin ceiling. 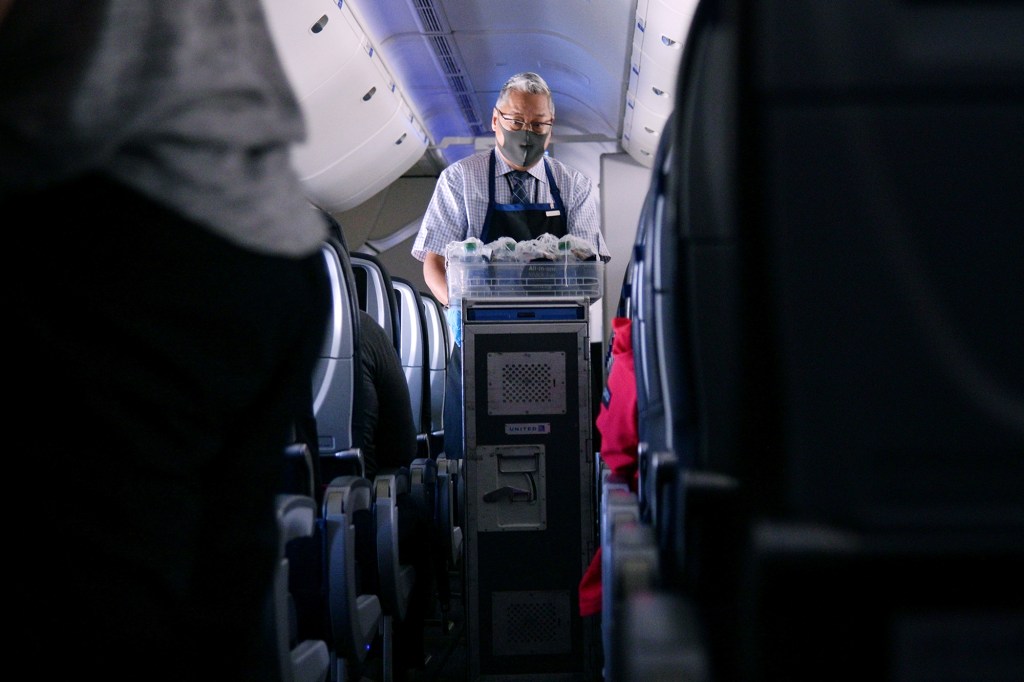 
Tensions on Capitol Hill boiled over in the early hours…

“And so it begins,” Twitter user Maranie Staab, a Portland, Oregon-based independent journalist, posted along with video of the incident.

She wrote that “flight attendants are struggling to control a plane full of Trump supporters as they display a pro-Trump projection and harass others passengers bound for DC.”

Footage showed several passengers yelling at another traveler who allegedly threatened them, a Trump supporter claimed, according to Fox News.

“He just threatened to f— kill us,” a man yelled on Tuesday’s Flight 1291, on which Trump supporters also were heard shouting disparaging comments about President-elect Joe Biden, according to the outlet.

A flight attendant asked a passenger standing in the aisle to sit down.

“Please have a seat. I’m talking to you in the aisle. Have a seat, please. Now,” the crew member said.

Julie Hedrick, president of the Association of Professional Flight Attendants, which represents American Airlines’ more than 25,000 flight attendants, told CNBC that the union is “incredibly concerned about recent politically motivated incidents on board passenger aircraft.

“Regardless of one’s political beliefs, the cabin of a commercial aircraft must, out of necessity, be a calm environment for the safety of everyone on board,” she said.

American Airlines rep Andrew Trull told The Post that the company is “reviewing the incident.”

“We applaud our outstanding crewmembers for their professionalism in de-escalating a tense onboard situation and getting our customers to their destination safely,” he said in an email.

Trull also said the airline has increased staffing at DC-area airports “as a precautionary measure and will not be serving alcohol on flights to and from this area.”

He added: “We will continue to enforce policies that ensure our customers’ and team members’ safety and wellbeing.”

Meanwhile, Trump supporters on a Delta Air Lines flight from Salt Lake City to DC heckled Utah Sen. Mitt Romney, the lone Republican senator to vote to oust Trump after he was impeached.

Delta told CNBC that it was aware of the incident and that “our crew quickly engaged and resolved the matter.

Hawks, Nets and Hornets are overvalued