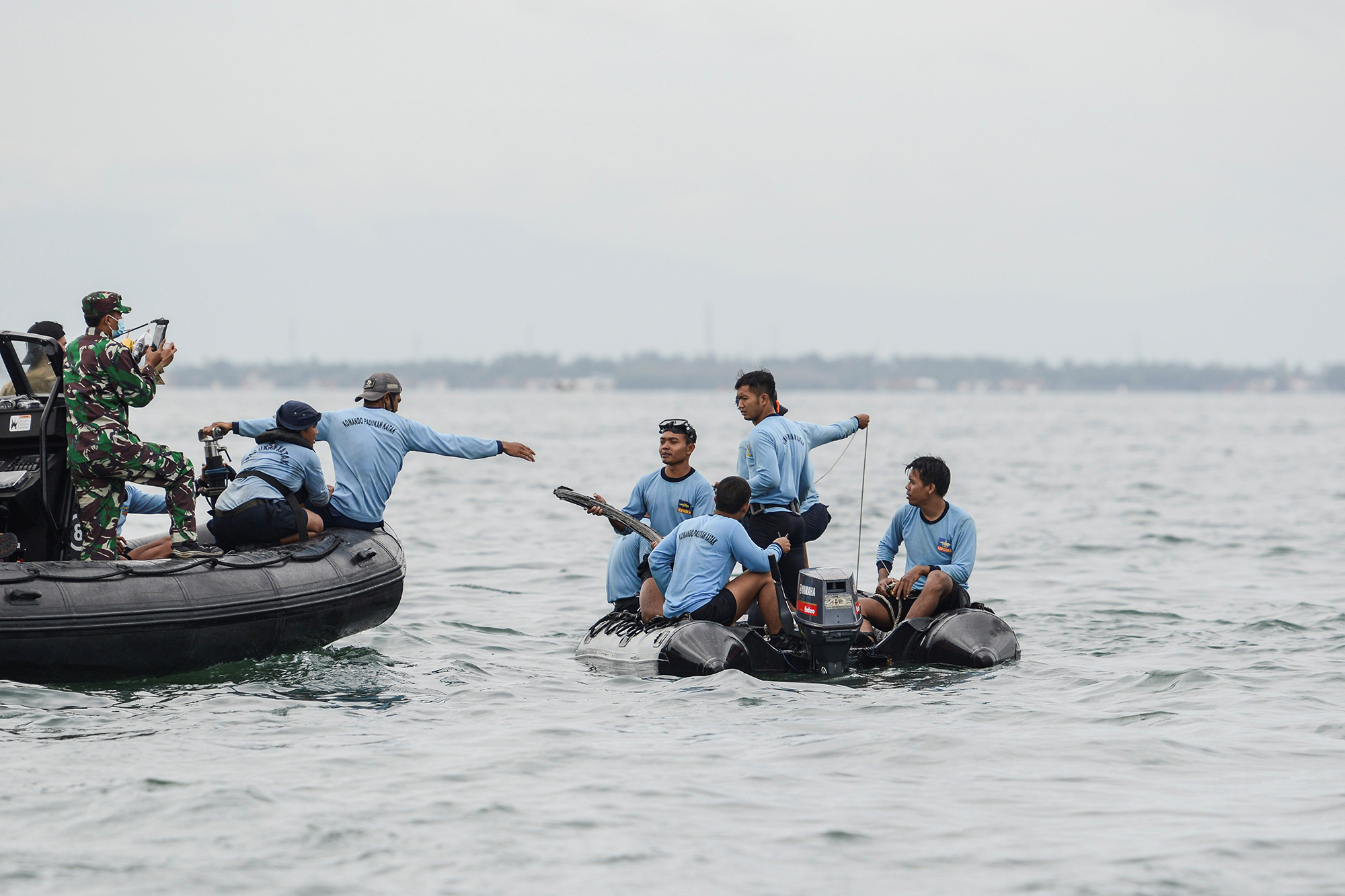 The pilots of the Indonesian airliner that plunged into the sea off Jakarta with 62 people aboard did not declare an emergency or report technical problems before the Boeing 737-500 went down, according to a report.

“It’s like a normal conversation and nothing suspicious,” he told Agence France-Presse. “There’s no talk of an emergency or something like that.”

Preliminary data suggest it was “most likely” that the jet was intact when it hit the water Saturday, Utomo said, adding that “we don’t know at this stage” what caused the crash.

His comments came as divers searched for black boxes — cockpit voice and flight data recorders — that could be crucial to help explain why the aircraft went down with 62 Indonesians aboard, including 10 children.

Some of the 2,600 personnel working in the recovery effort are pulling body parts, twisted pieces of debris and passengers’ clothing from shallow waters about 75 feet deep.

Body bags with human remains were being transported to a police hospital where investigators hope to identify people by matching DNA from their remains to living relatives.

Rapin Akbar, who provided a blood sample, had five relatives on the ill-fated flight, including an older sister, a nephew and his wife and their 7-month-old baby.

“(My nephew) had planned to go back to Pontianak on Sunday but changed his mind and decided to fly on Saturday instead,” Akbar told AFP. “He called me to say the flight was delayed and sent me a picture of their baby. It was (their) first.”

Aviation experts said flight-tracking data showed the plane deviated sharply from its planned route before it went into a steep dive, with bad weather, pilot error and mechanical problems among the potential factors.

“Something quite dramatic has happened after takeoff,” said Stephen Wright, professor of aircraft systems at Finland’s Tampere University, AFP reported. “The airspeed is far too low. The aircraft didn’t accelerate up to the correct speeds for continuous flight.”

Authorities said signals from the black boxes have been detected between Lancang and Laki islands in the Thousand Island chain just north of Jakarta.

Soerjanto Tjahjono, the transport committee’s chairman, ruled out a possible midair breakup after seeing the condition of the wreckage, which was concentrated in one area.

A midair explosion would have caused debris to be spread over a large area, he said.

“It was broke apart naturally upon impact with water … there is no indication of unnatural destruction or explosion so far,” Tjahjono told The Associated Press. “However, this still has to be confirmed by reading the black boxes.”

“The current condition and waves are favorable .. but the black boxes were buried under tons of sharp objects of the wreckage,” Margono told reporters Monday.

Sriwijaya Air, which has not recorded a fatal crash since it started operations in 2003, has said little about the plane, which was previously flown by Continental Airlines and United Airlines.

The incident is the first major air crash in Indonesia since 189 passengers and crew perished in 2018 when a Lion Air Boeing 737 MAX also plunged into the Java Sea.

PPP Loans: Everything We Know About Latest Small Business Protection

WFAN won’t give up disgusting antics