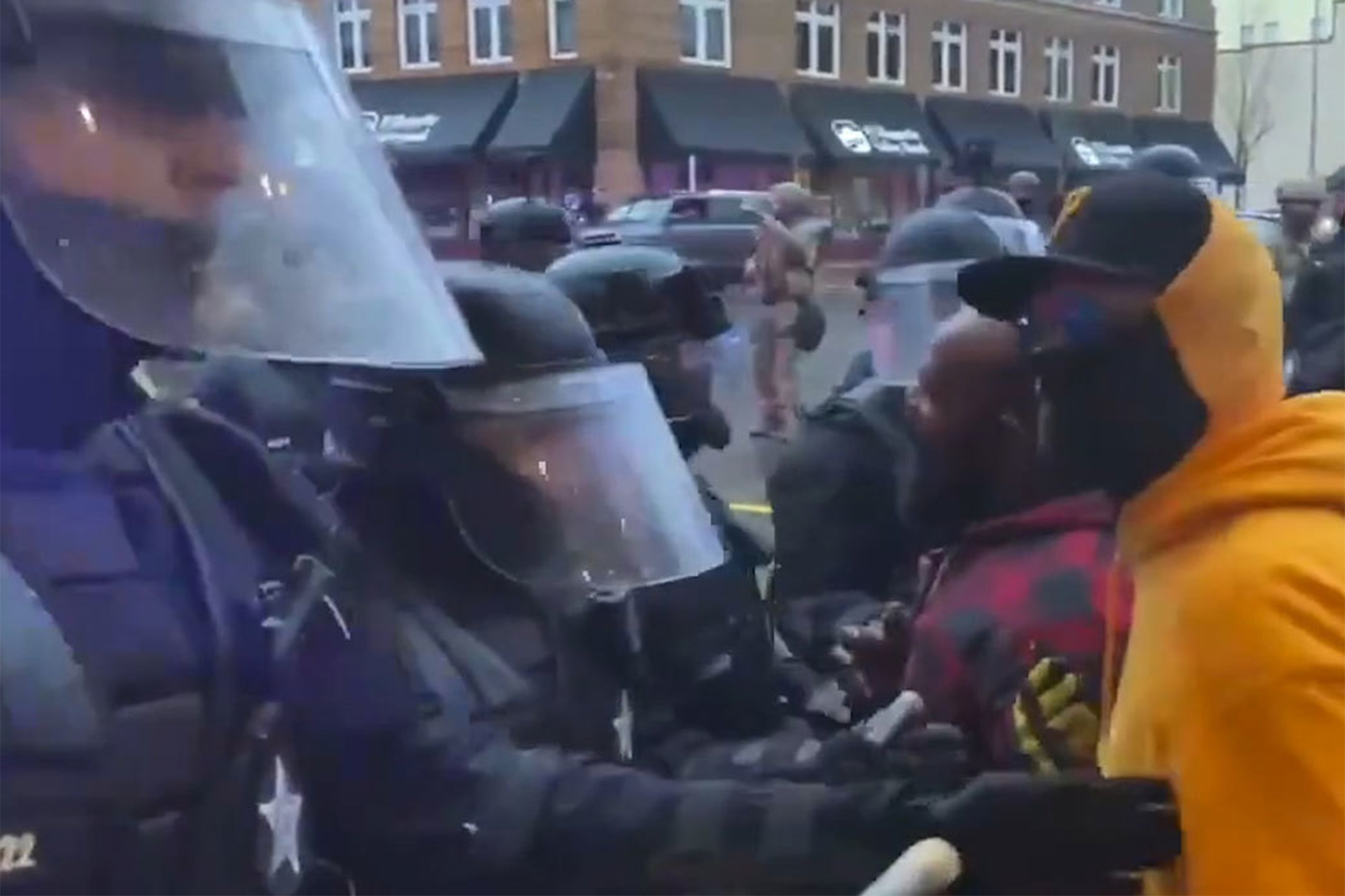 Pro-police protesters quickly turned on cops when they were confronted during a protest in Oregon — ending with a Thin Blue Line American flag being stamped on amid cries of “f–k the blue,” videos show.

Salem police singled out the right-wing group for clashing with officers who tried to stop them from breaking away from a peaceful pro-Trump rally in the state capital on New Year’s Day.

A series of videos by News2Share show officers firing flash-bangs as they confronted the group, including some “armed with various weapons, knives, chemical sprays, batons and firearms,” police said in a release.

“No more support for you guys. Zero — zero support!” one man ranted as a line of officers pushed back the splinter group, many in the black-and-yellow colors favored by the Proud Boys, the videos show.

Another man ranted about how “f—ing hard” the officers were making it for them to continue supporting the cops, especially after they appeared to ignore Black Lives Matter counter-protesters.

“Ten f—ing months in a row I fought for you, you, you, you against the very f—ing people that want to take you a f—ing part,” he yelled, pointing at a row of officers walking behind him in the News2Share clips.

One man then appeared to try to burn a “back the blue” sweatshirt, as others threw a Thin Blue Line stars-and-stripes flag on the floor.

“Step on that f—ing flag, and then we’re gonna burn it,” one in the group said, as others shouted “f–k the blue.”

Even one of the group pointing out that the flag “stands for fallen officers” did not stop their ire, with a woman — ina black and yellow rain jacket — repeatedly stamping on it over a puddle.

“When they stand for BLM and Antifa, they have fallen,” the woman insisted, calling cops “f—ers” as others calling it “punishment for treason” by the cops.

“F–k the blue! F–k you!” members of the group chanted.

Salem police said it “took approximately one hour, most of the officers assigned to the event, and the utilization of physical force and less-than-lethal munitions to move the crowd out of the streets and back to the state capitol.”

“Three people were taken into custody for their actions during the declared unlawful assembly,” the force said, including a 33-year-old local man Max Damaskin charged with carrying a concealed firearm.