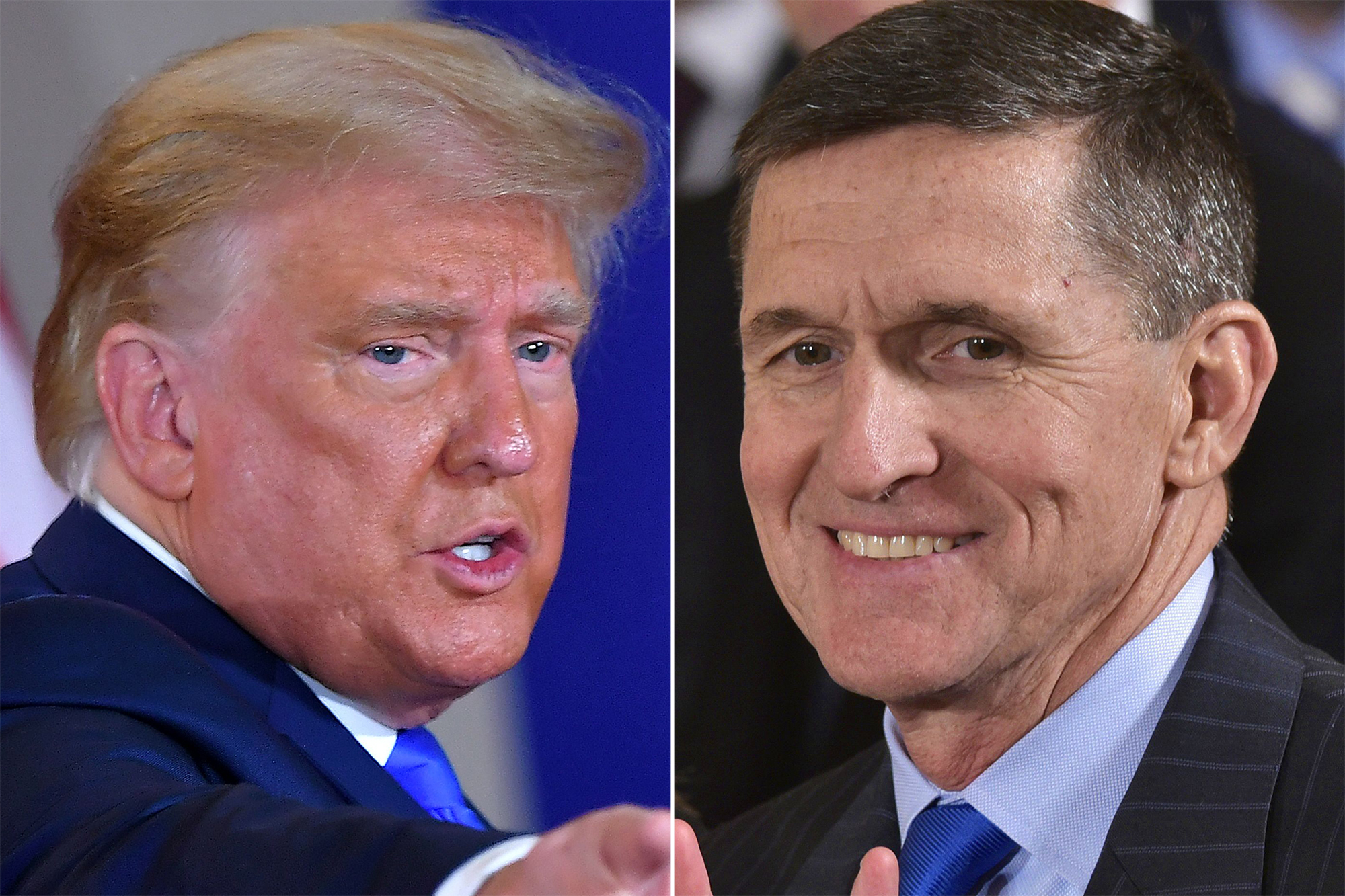 President Trump pardoned Michael Flynn, his first national security advisor, who pleaded guilty to lying to the FBI about his contacts with Russian officials — the first of several clemency actions Trump is expected to take before he leaves office on Jan. 20.

“It is my Great Honor to announce that General Michael T. Flynn has been granted a Full Pardon. Congratulations to @GenFlynn and his wonderful family, I know you will now have a truly fantastic Thanksgiving!” Trump tweeted Wednesday.

The president, who has consistently argued that his 2016 presidential victory was undermined by the FBI’s investigation into whether his campaign colluded with the Kremlin, is also reportedly weighing pardoning former campaign officials Paul Manafort and Carter Page.

He has already commuted the sentence of longtime political operative and confidant Roger Stone, who was convicted of obstructing the House’s probe into whether Trump operatives cooperated with Russia before the 2016 election.

Trump commuted Stone’s sentence in July, days before he was to begin serving 40 months in prison.

Flynn, a retired Army lieutenant general, pleaded guilty in December 2017 to lying to FBI agents about the conversations he had with then-Russian Ambassador Sergey Kislyak.

Flynn later tried to withdraw that plea ahead of sentencing, claiming he did not intentionally lie.

The president fired Flynn in February 2017 after it came to light that Flynn’s contact with Kislyak was concealed from Vice President Mike Pence. Flynn had been on the job for just 24 days.

According to the charges, Flynn denied that he privately asked Kislyak in December 2016 not to escalate the situation by retaliating against President Barack Obama’s move to toss 35 Russian diplomats over Russia’s meddling in the 2016 election.

The Justice Department in May moved to drop Flynn’s case before sentencing, arguing that FBI agents had no reason to interview him and any lies he told were not material.

But a federal appeals court in Washington declined to order the dismissal, which as of Wednesday remained pending before US District Judge Emmet Sullivan.

President-elect Joe Biden allegedly suggested the never-used Logan Act of 1799 as a rationale to keep open an investigation of Flynn that the FBI was prepared to close. The Logan Act bans ordinary citizens from conducting foreign diplomacy. It has never resulted in a conviction and is widely considered unconstitutional.

Transcripts of the calls between Flynn and Kislyak were released in May and show Flynn did discuss with the Russian ambassador both sanctions and a UN vote. But Republicans said the transcripts showed “there was nothing improper” about the substance of the calls, which Flynn made with the knowledge of other Trump transition officials.

In late April, Trump claimed that Flynn had been “essentially exonerated” of lying to the FBI after documents were released as part of a re-examination of his case showing the then-counterintelligence director of the bureau openly questioned whether the agency’s “goal” was to “get [Flynn] to lie.”

“He’s in the process of being exonerated if you looked at those notes from yesterday. That was total exoneration,” Trump said of the newly revealed information at the time. “These were dirty, filthy cops at the top of the FBI, and you know the names better than I do. And they were dishonest people.”

The president has issued 27 pardons and 11 commutations during his four years in office.

George Springer would ‘shine’ with Mets

Jon Ossoff would support new lockdown if ‘experts’ recommend it